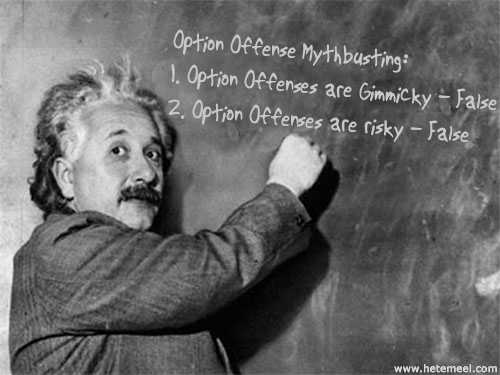 Search Google.com for option football related content or listen to a commentator on TV and you will inevitably come across some commonly held beliefs about option offenses. Someone will probably make the claim that option offenses are gimmicky or are susceptible to turnovers. Obviously, sometimes these assertions are true, but applying them generally to a conceptual aspect of a very complex game is as ridiculous as any other stereotyping.

Below are the first five of ten commonly circulated myths surrounding option offenses and some of the reasons I believe they are busted. Thanks for stopping by and please feel free to tell us your thoughts and ideas in the comment section below. I’m always interested in hearing new perspectives on the game of football and don’t forget to sign up for regular updates from OptionFootball.net. You can do so by entering your information in the sidebar to the right or by going to my subscribe page. Remember, by signing up you will also receive a free copy of my Flexbone eBook when it’s published.

Myth #1 An Option Offense is a Run Only Offense

It depends on offensive philosophy and game plan.

As is the case with most offenses systems, option offensive coordinators probably base play choice on what the defense is doing. If the defense is allowing the offense to run the option, they will. If they load the box, the offense will probably adjust and call some plays to loosen the defense up a bit. Kind of like other offenses right?

Note: I do see some validity to this argument. It is true that to be effective in an option offense you have to dedicate the majority of your practice time to running the option. This will certainly reduce the amount of time available to work on complicated passing schemes. This does not mean “run only.” What it means is that the offense utilizes run game concepts to set up big play potential in the passing game.

In my opinion, this is a logical fallacy. It’s known as the Questionable Cause Fallacy. This fallacy establishes that just because two things exist in correlation, it is a not possible to conclude one causes the other. In short: correlation does not equal causation. In this instance, because some option football teams turn the ball over, some decide option football is the reason for the turnovers.

Again, absurdity abounds. Taking care of the football is a skill that should be developed and therefore must be addressed during practice. If you run an option offense, you will probably want to incorporate some things into your practices every day. Emphasizing key coaching points for the option quarterback (e.g. Give unless, and never pitch under duress) is important. Ball handling and security drills are a good idea too.

Myth #3 Fast, physical defenses can shut an Option Offense down

Again, John Madden probably thought this one up. It would make sense, at least to me that fast, physical defenses can shut any offense down. It is a function of execution. If you execute your scheme better than the opponent does, you will be successful. This being said, there is some compelling evidence to the contrary. Florida, with Tim Tebow, ran an option offense very successfully against SEC defenses. So did Cam Newton and Johnny Football. Most people would consider SEC defenses to be among the fastest and most physical in the country. And now we are seeing option schemes being successfully run in the NFL. Defenses don’t get any faster or more physical than those found in the National Football League.

Myth #4 Option quarterbacks have to be fast

As a coach of an option offense for the last seven years, I have a lot of personal experience that says otherwise. Some of the best option quarterbacks I have seen are those that compete and can execute the reads effectively. I would take a quarterback with average speed who makes 90% of his reads over an athlete with a 4.3 second 40-yard dash who makes 25% of his reads. Obviously a faster quarterback with high read percentages is preferable, but running an option offense doesn’t need speed, it requires execution.

The only difference speed makes is big play potential. If you choose a really fast option quarterback who misses most of his reads you will have an offense that hits occasionally on the big play but is unable to sustain drives. This will result in inconsistent scoring and a defense that is probably on the field too much.  Choose a player who is slower, but makes most of his reads, and the offense will sustain drives, dominate time of possession, and score points.

According to Dictionary.com, the word gimmick is typically used as a noun and has several possible definitions:

OK, so maybe option offenses are gimmicky. They are ingenious schemes designed to attract attention by gaining yardage and scoring points. Additionally, option offenses are deceptive and work to confuse defenses. So option football is a gimmick and so are play-action passes, zone blitzes, and counter plays. And so is the forward pass by the way.

But, as is often the case with language, definitions are fluid and dynamic. Their meanings can shift depending on the context. Within the context of football, a gimmick is a word used to describe a scheme or play that is less legitimate than other schemes and is viewed in a negative light. It brings with it connotations of cheating or at least a less noble method of achieving success.

Again, absurdity abounds. Option offenses are highly technical schemes that need an in-depth understanding of various skills and techniques and are based on near perfect levels of execution. Just like other football offenses. The difference is that option football can be effective with less talented players.

Thanks for reading and if you enjoyed this article, or any others here, please share this article with others. I can’t wait for the start of the 2013 football season! Until then, Know the Option. Run the Option. Love the Option!