In the last post we explored the stances developed by Coach Faurot for the Split-T backfield. We will continue to explore the mechanical aspects Faurot named as being important to the success of his scheme. Today we will discuss positional requirements for the Split-T.

As previously stated, the Split-T does not need exceptional players at each position to be successful. That being said, there are a few desirable characteristics that will help to make the offense more effective.

It is beneficial to the offense if the quarterback can throw the ball, but the other traits are more important. Most athletes can be taught to make the throws necessary in the play action concepts of the Split-T.  If the quarterback is an exceptional passer, the coach might want to consider expanding the playbook and taking advantage of his abilities.

The Split-T fullback is an exceptional blocker and in many cases might be a converted offensive lineman. He must be able to make blocks on larger defensive lineman and clear a running path for other backfield players. He is similar to the blocking back of the single wing and his blocking is vital to the offensive success of the Split-T.

If the fullback has some running ability as well, then the offense will even more effective.

Speed is the top attribute to look for in the Split-T halfbacks. These two players are usually the fastest players in the backfield and should have exceptional open field running ability.

In the Split-T, it is also important for the halfbacks to have the ability to make a running pass. If the player is able to throw on the run, he is more capable of tucking the ball and getting up field if the receiver isn’t open. This makes the final option in the play sequence devastating to defenses.

Finally it is extremely helpful if the right halfback is left-handed, and the left halfback is right-handed. This makes the running pass much easier and allows the coach more balance in play calling. 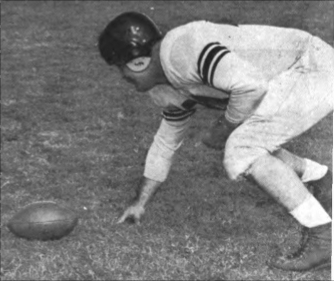 They should be intelligent and able to assess the defensive front. This is important when determining splits and blocking schemes.

Quickness is important as well due to the wider splits taken against certain fronts.

Coaches are always excited when they have exceptional athletes or players on their rosters, but the reality is most of us have to go to battle with average players. Here in lies the beauty of option football. And it all started with the Split-T.

As with more modern option offenses, Don Faurot’s Split-T is a great fit for teams who regularly take the field with undersized or less talented players. The ability to create mismatches and give your team a numbers advantage at the point of attack are what allow teams like Navy and Army to compete against teams with superior talent.